What is Careless and Inconsiderate Driving? 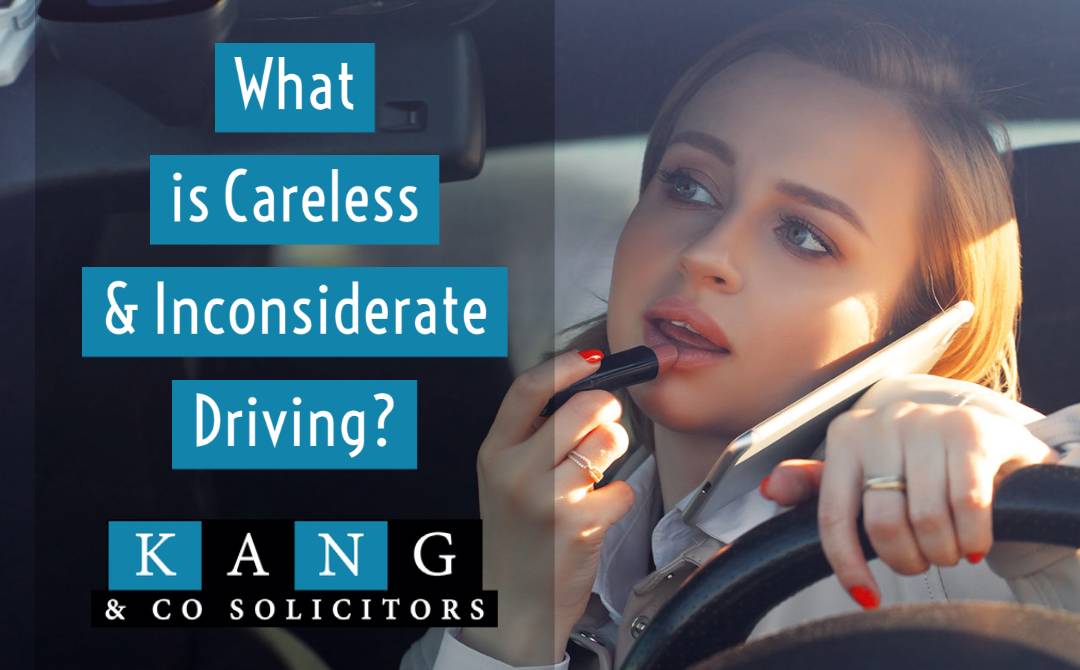 Here at Kang and Co, our team deal with all manner of motoring offences. This article will analyse the offence of Careless and Inconsiderate driving (Driving Without Due Care and Attention), the elements of the offence that the Prosecution need to prove, the various sentences which can be given upon conviction, as well as examples of such behaviour.

The Law for Careless and Inconsiderate Driving

The legal position in relation to careless and inconsiderate driving is set out under section 3 of the Road Traffic Act 1988. This section states:

“If a person drives a mechanically propelled vehicle on a road or other public place without due care and attention, or without reasonable consideration for other persons using the road or place, he is guilty of an offence.”

Upon reading, it becomes clear that the above section provides for 2 offences driving without due care and attention (careless driving) and driving without reasonable consideration for other persons using a road or place (inconsiderate driving).

Examples of behaviour which may be charged

Elements of the Offence

To supplement the above, the Road Safety Act 2006 amended the Road Traffic Act 1988 to include section 3ZA. This new section gives a meaning as to what the above offence actually means. It states:

(1) This section has effect for the purposes of section…3…

(2) A person is to be regarded as driving without due care and attention if (and only if) the way he drives falls below what would be expected of a competent and careful driver.

(3) In determining for the purposes of subsection (2) above what would be expected of a careful and competent driver in a particular case, regard shall be had not only to the circumstances of which he could be expected to be aware but also to any circumstances shown to have been within the knowledge of the accused.

(4) A person is to be regarded as driving without reasonable consideration for other persons only if those persons are inconvenienced by his driving.

This is an objective test, meaning that the behaviour is compared to that of a reasonable person. The Prosecution must show, beyond reasonable doubt, that the Defendant’s driving fell below that of a competent and careful driver. This is, of course, based on the facts of the alleged offence.

How Can I Defend Against a Charge of Careless or Inconsiderate Driving?

Again, this is very much fact sensitive. In relation to a charge of careless driving, the Defendant must show that his driving was not careless in that his standard of driving did not fall below that of a competent and careful driver.

For example, if there is a collision between two vehicles and the Police believe that Driver A is at fault, a charge is brought against him. However, at trial, if, either through photographs, road plans or the cross-examination of Driver B, the Court is satisfied that Driver B was actually the one at fault for the collision, then Driver A is acquitted.

Another example is where there is a collision between Driver A and a wall. Driver A explains that the car acted oddly before the collision. Subsequently, it is found that a steering fault had caused the collision. Though expert evidence is usually likely in such cases, this scenario would be a defence to careless driving. However, such a defence would likely not succeed if the defect was already known to Driver A.

However, inexperience is not a defence. So, where a learner driver collides with another vehicle and the circumstances show he was at fault, he will be guilty of an offence.

In relation to inconsiderate driving, it would be for the Defendant to show that his driving did not, in fact, cause another driver to be inconvenienced. This would be down to the evidence given by the complainant, if doubt can be raised that any inconvenience was actually suffered, then the Court would acquit.

What is the Likely Sentence for Careless and Inconsiderate Driving?

If pleading guilty or being convicted after trial, there are a number of tiers within the sentencing guidelines for this offence and it will be based on the facts of the offence as to which tier the Court places the Defendant for sentence:

In determining whether there is Higher Culpability, the Court will have regard to the following:

In all other cases, there will be a finding of Lower Culpability.

In determining whether there is Greater Harm, the Court will have regard to the following:

In all other cases, there will be a finding of Lesser Harm.

An example would be a collision between two vehicles with evidence of the Defendant driving at high speed. In that case, there would be both Higher Culpability AND Greater Harm. This would see the Defendant into category 1 – the most serious category.

Another example would be a driver merging from a side road into the path of another vehicle requiring evasive manoeuvres. In that scenario, there is no excessive speed or evidence of tiredness, likewise, there is no damage or injury and no evidence of any high levels of traffic or pedestrians. In such a scenario, this would see the Defendant placed into category 3 as there would be Lower Culpability AND Lesser Harm.

Once the category of offence has been determined, then the following guidelines apply:

The fine element of the sentence is the “punishment” and the disqualification or points is the ancillary order which must occur. Only the punishment can be reduced in terms of any credits for guilty plea.

If you find yourself facing a charge of Careless or Inconsiderate Driving, Kang & Co have specialist lawyers on hand to advise and represent you throughout the entire Court process.